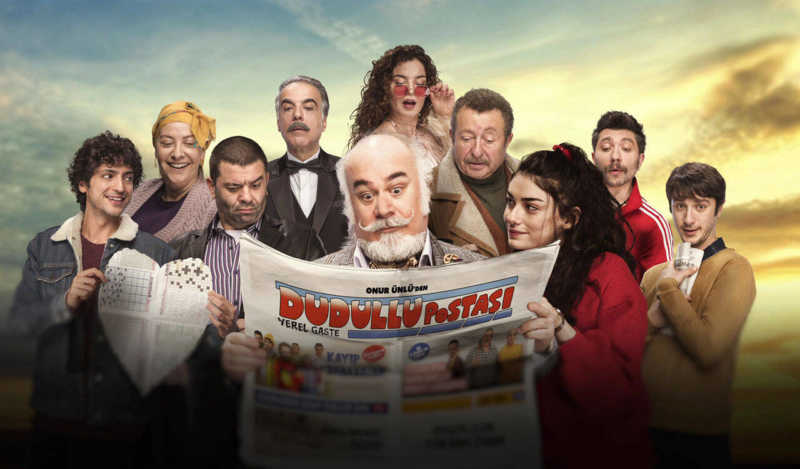 A “new” Turkish TV series Dudullu Postası — “Dudullu Post” is going to start tomorrow on Turkish broadcaster Kanal D. However, the series is not a new one really! It is nowt a new series because the COVID-19 epidemic has been hitting Turkey, just like the world. Due to the coronavirus (COVID-19) break out in the world, it seems old series are going to re-stage on television.

Turkish TV series has a huge slice at the cake of the world’s TV series industry. Every year, Turkish televisions produce and export new series and dramas to the world. Therefore, it is a huge industry and has no endurance to take a break! But, the situation is serious and it gets even worse day by day. Thereby, some of the Turkish TV series has recently decided to have a break for their sets. Hence, the former series show up again on TV screens.

Dudullu Post is 2018 make 13-episode long mini internet series. Every season of the series had been planned as being 13 episodes. The series was shot for an Internet entertainment platform, Blu TV, and became accomplished.

Dudullu Post was published on the digital platform Blu TV. It is now preparing to meet the audience again on Kanal D screens. Many famous comedians come together in the series. The series was inspired by the legendary cartoon series Dudullu Postası. The creator of this cartoon series is illustrator Serkan Yılmaz. So now, many audiences question the broadcasting time of the series. So when will Dudullu Post start? Who are the players of Dudullu Postası? Here in this article, you will get all the answers.

What is the Story of Dudullu Post Turkish Absurd Comedy?

The story and subject of the Dudullu Post Turkish TV series belong to Banu Uzpeder and Fuat Mete. Scenario, on the other hand, belongs to Funda Alp and Yiğit Sertdemir.

The story of Dudullu Post Turkish Turkish TV comedy revolves around a man who takes the journalist at the very centre of his life. The mas, Asım (Güven Kıraç), is unaware of his incapability, but he considers himself as the one and only talented journalist of the whole country, anyways. Moreover, he is blind to admiring himself.

So, everything starts with his intention to publish a local newspaper in the small neighbourhood in Istanbul, Dudulu. Hence, the name of this little area gives its name to the newspaper, -Dudullu Post.

So, Tayfur (Taner Ölmez) starts working in this newly opened newspaper alongside his friends Ersan (Ahmet Rıfat Şungar), and Cem (Özgür Emre Yıldırım). Thus, Tayfur, one hand, tries to reach Melis (Hazar Ergüçlü), the woman he loves, by getting rid off his brother Eyüp (Bülent Şakrak). On the other hand, he tries to find the “Lost Fathers” in the neighbourhood with his teammates.

The new TV series of Turkish televisions is going to start on the 2nd of April (tomorrow), 2020. Dudullu Post is going to be broadcasted on Kanal D screens, a Turkish private broadcaster. You can watch the series every Thursday at 20.00. Furthermore, you can also watch the series through the internet entertainment platform Bul TV.

What is the Genre of the Dudullu Post Turkish Series?

The genre of the series is an absurd comedy, fantasy, thriller and detective. So, on the regards of its genre, Dudullu Post distinct from its kinds. And the director of the series is Onur Ünlü, who is famous on this kind of Turkish TV series and feature film. He is best known with his TV series such as Leyla and Mecnun (Leyla ile Mecnun), Visible Man (Görünen Adam), Five Brothers (Beş Kardeş), and Şubat (February).