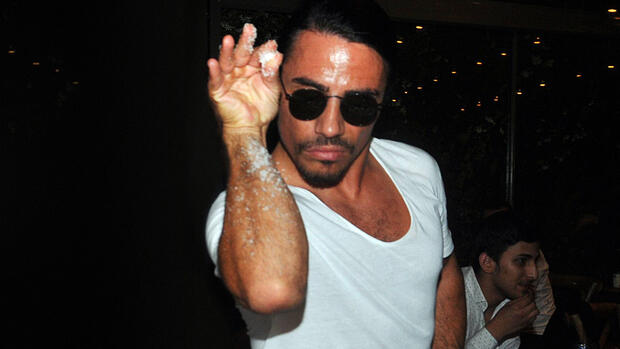 As you can all imagine, Turkish cuisine has many delicious and diverse tastes. The first must-do thing for travellers who visit Turkey is to taste Turkish foods. They can prefer to do this either in a casual street food seller or in a luxury restaurant. So, you can undoubtedly find millions of both in any part of Turkey.

Many talented chefs of Turkey has also spread their names around the world, while some of them making great jobs in their own restaurants both in Turkey and in the world. Plus, they have tens of thousands of followers who are waiting for them to share new posts with steak, fish, and anything you can mind.

So, here in this article, we would like to share with our valuable readers some of the best-known Turkish chefs on Instagram. We assure you that you will have lots of fun following them and improve your cooking style!

Ali Güngörmüş was born in Tunceli in 1976. The famous and talented chef became the first Turkish chef to ever receive a Michelin Star. He received it in 2006 for his restaurant Le Canard Nouveau in Hamburg, just a year after taking over. In 2014, he opened Pageou in Munich, which serves “bistronomy”. In other words, fine cuisine in a more laid-back atmosphere. With three cookbooks to his name, Güngörmüş also teaches his take on Mediterranean cuisine the first Saturday every month in Munich.

The second chef of Turkish heritage to receive a Michelin Star was Serkan Güzelçoban. He was 34-year-old when he was selected as Michelin Star. He did so in 2014 with his restaurant Handicap in Künzelsau, in which half of the staff employed are either physically or mentally handicapped. Now, he serves his trademark Orient-meets-Occident cuisine at Kleinod, housed in the Orangerie of the Hofgarten in Öhringen. He was born and raised in Germany, and his family celebrates their son’s successes from Denizli.

We are sure that you didn’t know one of the world’s top sushi ambassadors is a Turk. After qualifying for the annual World Sushi Cup in Japan in 2017, he was considered to be one of the top 30 sushi chefs in the world. He also received a “black belt” for culinary art World Sushi Cup in Japan. Engin Onural has two highly acclaimed restaurants in California. Attention! Those restaurants are famous for sushi and pairings. In 2015, this 35-year-old chef, who was born in Buffalo, New York but grew up in Ankara, was also named America’s best new chef by the publication “Best Chefs America.” Onural opened his first restaurant when he was 26. The name of the restaurant is The Venue Sushi Bar & Sake Lounge in Palm Desert. Then his second venture was Sandfish Sushi & Whiskey in Palm Springs. It has just celebrated its one-year anniversary.

We all know and love Somer Sivrioğlu from Masterchef programme in Turkey. However, Turkish chef Somer Sivrioğlu is also a well-known television personality in Australia. He has been introducing elegant and modern Turkish food to Sydney at his two restaurants Efendy and Anason. Somer was 25 when he went to Australia. He is now 48-year-old and hailing from Istanbul.

Fatih Tutak was born and bred in Istanbul. The chef Fatih Tutak has worked at the best restaurants in the world, such as Noma in Copenhagen and the three Michelin star Nihonryori Ryugin in Tokyo. He is now the chef at The House on Sathorn in Bangkok where he serves innovative Turkish cuisine and which has been listed as one of Asia’s 50 Best Restaurants in “The World’s 5 Best Restaurants” list.

Not only men take place in our list, but also women. Selin Kiazim brought up in London by Turkish-Cypriot parents. She has become one of the city’s most popular rising chefs with her restaurant Oklava. Kiazim opened her restaurant in 2015 and showcases Turkish and Cypriot cuisine. Her most recent venture Kyseri, which opened this summer, is centred on Turkish pasta and cuisine from Kayseri. In 2017, Selin also released her cookbook Oklava and was one of the winners of BBC Two’s television series “Great British Menu.”

Have you heard of Hüseyin Özer? Because most Londoners have heard of him. That’s the reason why he certainly deserves an honourable mention and hats off to him. He succeeded single-handedly revolutionizing Turkish cuisine in the 80s. Moreover, he made it in the British capital by elevating the döner kebab stereotype with his upscale Sofra and Özer restaurants.

Hüseyin Özer is a true Cinderella story. He was born in a village in Tokat and disowned by his family. Furthermore, Özer didn’t get the chance to go to school and taught himself to read. What’s more, his brother tried to poison him and by 11, he was living on the streets in Ankara as a homeless and he slept in public toilets. By the age of 26, he somehow managed to get to London where he began working in Kebab shops. He, later on, took over ownership and turn them into modern, fine dining Turkish cuisine with his Sofra chain.

Hüseyin Özer was a millionaire by the time he was 30, which had multiplied sixtyfold when the Discovery Channel show “The World’s Richest People” documented his story. At almost 70, Özer has owned nearly 20 cafes and restaurants in London. He still continues to run his two Sofra restaurants in Mayfair and Oxford. He established the Huseyin Ozer Education Trust early in his career and has been given an honorary doctorate of letters from the University of Westminster.

Hüseyin Gezen is the man who whispers to the marine fishery. So, he deserves the master titler to the end. Özer serves his fans at Deliyengeç Restaurant in Ankara.

Hüseyin Gezen has incredible talent and creativity with seafood. He perfectly knows how to combine fruits, vegetables and any kind of fish. The master chef is 34 and lives and runs a restaurant in Ankara. By the way, the name of the restaurant Deliyengeç means Crazy Crab. As for seafood lovers, they can visit the place when they come across in Ankara. The full address is Filistin Cad. No:2 DELİYENGEÇ ANKARA/ TÜRKİYE.

Mehmet Gezen is the older brother of Hüseyin Gezen as you can presume. The Turkish chef is known for specializing in a variety of seafood-based dishes. Often sharing his cooking tips and recipes through Instagram for his over 780,000 followers. He is also famous for being the head chef behind the restaurant Arasicak.

He was born and raised in Turkey. In the meantime, Mehmet Gezen describes himself as a new generation chef. Besides, the restaurant, where he is the head chef, is in Üsküp Caddesi No:25 ARASICAK-ANKARA-TÜRKİYE.

Abdullah Apuhan is the owner of Bişirici Kebap and Baklava. But, in addition to that, he is also the indispensable chef of the restaurant. They have been running the business in Gaziantep since 1976.

Seyfi chef is the head chef of the Örneket Steak House. The restaurant has been doing a great job in Bursa since 1970. They serve to their guests with a different style and concept. So the restaurant has a rich menu which consists of grills and very different types of meats.

A Turkish chef from Hatay! Burak Özdemir is just a 25-year-old chef, and it is hard to believe that he opened his first restaurant in Istanbul when was only 17. And now, he serves with 4 restaurants in Istanbul. So, the name of his restaurant chain is Hatay Civilisations Table as he is from Hatay.

Actually, he is more famous as Czn Burak Özdemir. He has more than 10 millions of followers on Instagram and 200 thousands of followers on Youtube. Finally, Czn Burak has become a brand and appeals to a very wide audience in Turkey. Also, you will be amazed by his unique smile!

Nusret, or better known as Salt Bae, is a Turkish butcher, chef and restaurateur. Since he has international fame, curiosity on him is increasing. After having a difficult life, he is now a phenomenon around the world. Afterwards, Gökçe became more widely known through a series of viral Internet videos and memes from January 2017 which show him “suavely” cutting meat and sprinkling salt.

His fame came from a viral video, “Ottoman Steak”, posted on 7 January 2017 on his restaurant’s Twitter account. So, the video was viewed 10 million times on Instagram, and after which he was dubbed “Salt Bae”. Because of his peculiar way of sprinkling salt: dropping it from his fingertips to his forearm, and then falling onto the dish. Due to the viral exposure gained from this post, Gökçe’s profile has expanded enormously. Furthermore, he has served a wide range of celebrities and politicians from around the world.

Finally, he has now more than 20 millions of followers on Instagram.