Do You Know Turkey | Turkish Tv Series & Drama, Turkish celebrities, travel information about Turkey and Turkish cusine.
Home News The 4 Most Popular Tourist Destinations of Turkey in 2019
NewsTravel and Places

The 4 Most Popular Tourist Destinations of Turkey in 2019

Turkey’s tourism data has been announced recently. According to the Ministry of Culture and Tourism of Turkey’s announcement, Turkey reached 42.9 million visitor number. So, between the months of January and November last year, Turkey had reached these numbers.

Turkey has hosted 48 million 46 thousand 732 visitors totally in the first 11 months in the previous year. Some 43 million of the visitors arriving Turkey comprise of foreigners. In accordance with January-November 2019 border statistics of the Ministry of Culture and Tourism, 42 million 910 thousand 408 foreigners visited Turkey. The rise became 14, 31 per cent in comparison to the same period of last year.

What are the Most Tourist-Sender Countries to Turkey?

In the first 11-month period of the year, Turkey welcomed the most visitors from the Russian Federation. The rise was 17, 42 per cent in comparison to last year. And the number of visitors from Russia is 6 million 887 thousand 136 visitors. Then, Germany took second place in the rank with rise of 11, 57 per cent. So the number of German visitor is 4 million 835 thousand 626 visitors. Finally, the United Kingdom takes the 3rd place on the list. The rise, this time, is  13, 30 per cent. So as the number, 2 million 506 thousand 246 visitors from the United Kingdom visited Turkey last year. Bulgaria and Iran are in pursuit of the list, respectively.

What are the Most Popular Tourist Destinations of Turkey in 2019?

Hagia Sophia was the most popular touristic site of 2019 with a total of 3,727,361 visitors, according to Turkey’s Culture and Tourism Ministry said. Ottoman Empire remodelled Hagia Sophia as a mosque after the invasion of Istanbul in 1453. After centuries, Hagia Sophia became a museum in 1935. The ministry added that the total number of visitors to all museum and archaeological sites has increased by 7 million. So that the number of visitors reached 35,048,417 in total. Thus, the ancient structure was the most popular destination in Turkey in 2019. Byzantine Emperor Justinian I ordered the construction of Hagia Sophia. So, the construction on the Hagia Sophia started in 532 and ended in 537.

The latest you can enter the museum is one hour before closing time.

Denizli/Pamukkale Hierapolis was the third most popular touristic destination with over 2,557,868 visitors. It is a UNESCO World Heritage site.

Topkapı Palace was the home of Ottoman sultans. Moreover, Mehmet the Conqueror built the palace. So, the palace was next in the popularity ranking and coming in fourth with 2,364,946 visitors.

So, the approximate duration is 75 minutes. Therefore, you are better if you meet your guide at the meeting point 10 minutes before the tour start time.

The Beloved Princess Diana: The Turkish Mezzo-Soprano Lori Şen Will Play The Princess in US Musical

Turkish mezzo-soprano Lori Şen is going to act as Princess Diana at an American musical. The musical tells the story of the beloved Princess...
Read more
Events

Orhan Pamuk is one of the most popular novelists in Turkey. Even though his wonderful talent for writing and picturing images into his works,...
Read more
Cuisine and Recipes

Lately, a Turkish Cookbook has won the most prestigious award in its own category. The book belongs to the founder and head chef of...
Read more 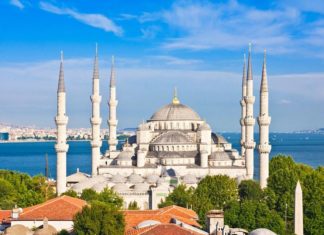 The 4 Most Popular Tourist Destinations of Turkey in 2019

An Actor, Model and a Former Basketball Player: Who is Furkan...