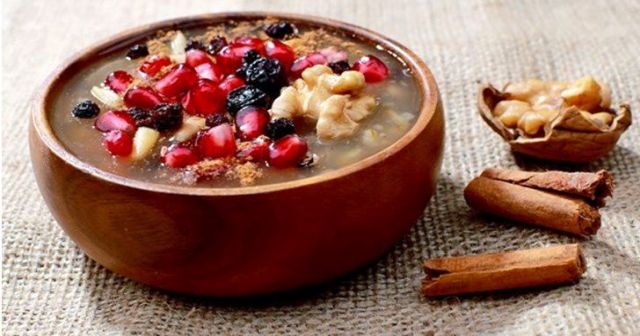 You cannot visit Turkey without coming across a very special dessert. The name of this flavour Turkish desert is Noah’s ark pudding. It is also and more commonly known as ‘aşure’. Noah’s ark pudding is a cornucopia of healthy ingredients like dried fruits, legumes and whole-grain wheat. They are sweet with the joining of sugar and fruit juices and cooked all together in one pot. This pudding traditionally contains a lot of different nutritional sources. Some of them are apricots, raisins, currants, figs, pine nuts, walnuts, hazelnuts. Furthermore, aşure also contains chickpeas, and navy beans to name just a few ingredients.

The Dessert As Old As The History of Humankind

Noah’s ark pudding, like many Turkish dishes, has its own story behind it. Turkish legend has it that the first version of ‘aşure’ was made by Noah himself. After weeks on the ark, the waters began to recede. As food stocks dwindled, Noah decided to throw bits of everything he had left on the ark into one pot.

What he got was a delicious pudding that kept he and his passengers well-fed until the ark finally rested on Mount Ararat in eastern Turkey. According to some beliefs, aşure is the oldest desert in the world.

In modern Turkish culture, Noah’s ark pudding is a symbol of diversity, friendship, and unity. When a cook prepares ‘aşure,’ they make a lot. Because it’s customary to distribute bowls of pudding to as many friends and neighbours as possible.

‘Aşure,’ the Turkish name for Noah’s pudding, is associated with Ashura. Ashura is common throughout the Middle East and spans many cultures, traditions, and religions. So, Ashura was originally a Jewish celebration. The celebration is marking the rescue of Moses from the Pharaoh during which Hebrews fasted. At the same time, Sunni Muslims connect this period during the year with the deliverance of Moses, too.

As for Shia Muslims, they celebrate the day of Ashura a few days before Ramadan. During “Muharram,” the 10th month, they celebrate to commemorate the martyrdom of al-Husayn. He is, by the way, the son of Ali and Fatima and the grandson of the Prophet Mohammed. Ashura reminds Muslims of the sacrifices the Prophet’s family made for mankind. Donation and sharing of food and sweets as an act of communion with God and reunition with humanity are the main points of the Ashura period.

There are even says that people in Haiti are also celebrating a version of Ashura!

There is no set recipe for making Noah’s ark pudding. So, there are hundreds, if not thousands of variations. Because of that, you can use the basic recipe below as a guide. You can adapt the ingredients and according to your taste or what you have on hand. Classic versions of ‘aşure’ use rose water to flavour the pudding.

You may consider adding the zest of an orange and a lemon instead of the rose water for a citrusy flavour. Furthermore, many cooks prefer the pudding plain with no added flavouring. Whichever way you choose to prepare it, be ready to share your Noah’s ark pudding with your neighbours, too. This recipe will make enough to fill a large pot.