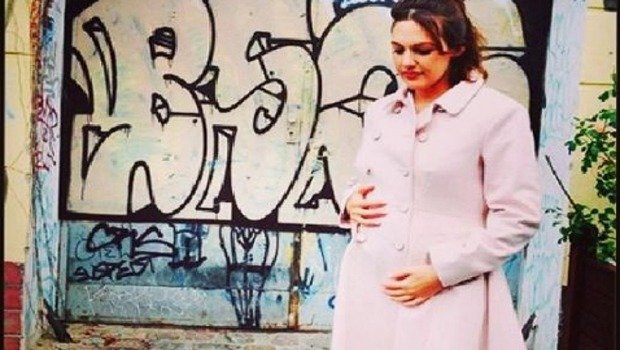 Meryem Uzerli is now in sixth month in her pregnancy and her belly leaps to the eyes. She shared a special photo in her daily life in Berlin.

After leaving Turkey and Muhteşem Yüzyıl(Magnificent Century) tv series, lots of things has changed for Meryem Uzerli… First she broke out with Can Ateş, then she learned that she is pregnant and then Can Ateş, who is the father of the child went to Germany to make their relationship up. But it is said that Meryem Uzerli’s heart is broken and Can Ateş didn’t make any efforts to reunite, his actions was said frosty. Also people were suspicious that he did not went Germany to reunite, he asked Meryem Uzerli for abortion and Meryem Uzerli didn’t accepted this offer.

The recent news confirmed this gossips. After Meryem Uzerli’s sharing of her pregnant pictures, reporters asked Can Ateş that what will he do about the baby. Can Ateş’s response was very frosty again and also kinda heart breaker and cruel… Can Ateş told that “Previously i said to Meryem to have abortion i do not have respect to you and this baby to be born, but she insisted to have this baby. Now i’m gonna take this baby on my name as the father but i will not do anything more than this. Meryem’s photos didn’t affected me and my thoughts didn’t changed.

Very sad news for Meryem Uzerli and her baby girl to be born.