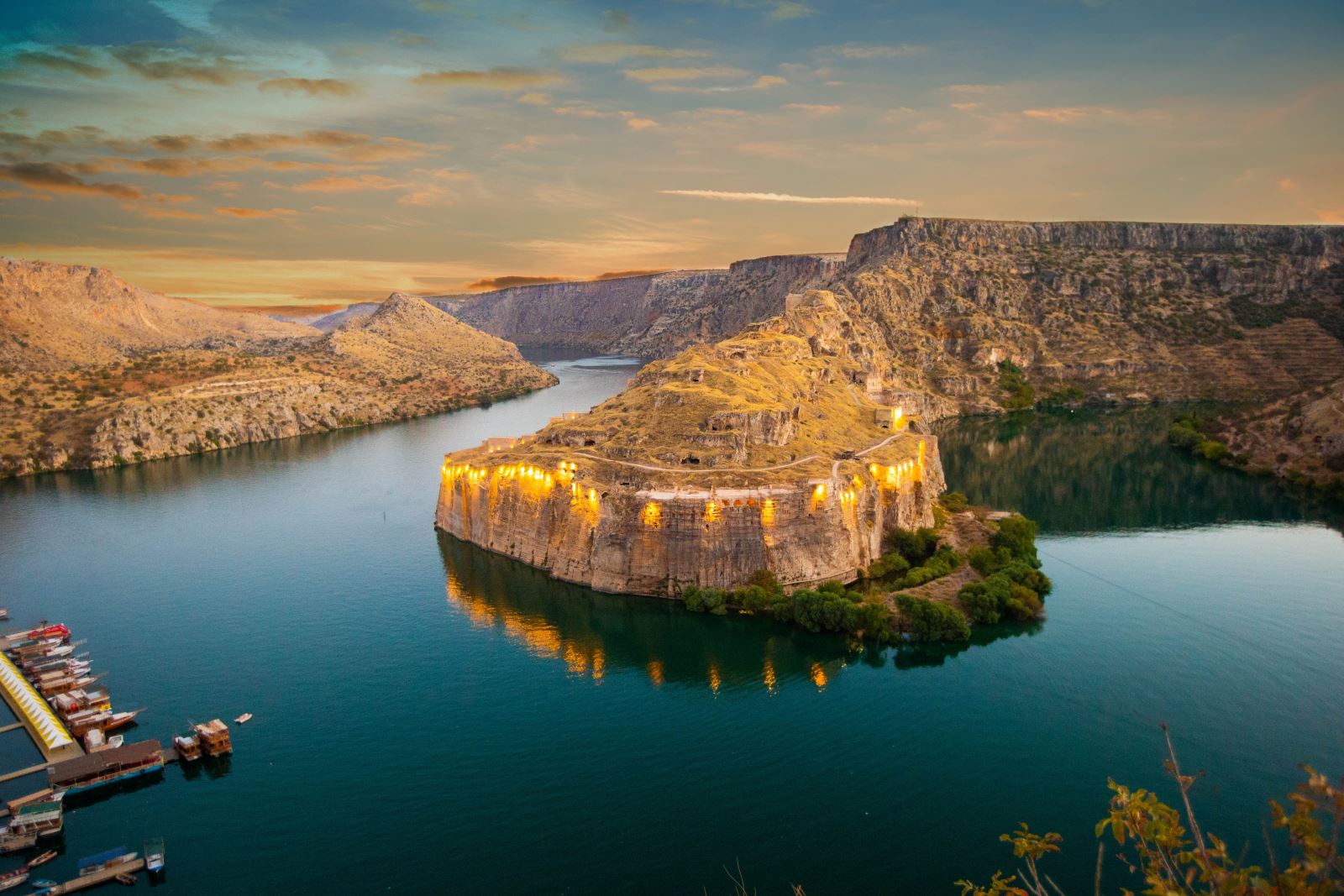 When it comes to talking about Turkey, there are innumerable facts to refer to. The country’s fascinating geographical position, its history that goes back thousands of years ago, … In addition to them, Turkey, or Anatolia became a land to many different civilizations throughout history. So, what the country has today which reminds the history of millenniums is the magnificent castles in Turkey.

The castles that we are going to mention below are some of the best castles in Turkey, but not all, of course. As the country has a long and rich history, there are so many historical remnants within the land. (Check out for the one particular we mentioned elaborately: Zilkale Castle in Turkey’s Rize Province). Therefore, consider this as a quick guideline when you go to travel in Turkey.

In 2018, the Culture and Tourism Ministry of Turkey ranked the 13 most magnificent castles in Turkey. The ministry picked them with regard to their conditions, historical backgrounds, and architectural beauties.

The building time of the castle goes back to the Urartian civilization. So, it served as an Urartian castle for hundreds of years. The castle is in Turkey’s Van, an eastern Anatolian city. However, the castle was abandoned in the 19th century. Luckily, it has been able to reach present as solid as its glorious days.

This magnificent castle in Turkey is located in the country’s one of the most popular touristic spots Cappadocia. The castle is at the top of the city where you will have a breathtaking panorama of the landmark. As it is at the top of the city, the only way to reach the top is to follow the many steps, but in the end, you will see it worth for every single one of them!

Tirebolu Castle is located in Tirebolu district center, on a peninsula extending towards the sea. Although we don’t know the exact date of construction of the castle yet, it is thought to have been built in the 15th century BC.

There are foundations of some buildings in the castle. At the beginning of these, there is a mosque altar carved into the south wall and the wall foundations of this mosque.

Mamure Castle, which reaches up to the present day in the Mediterranean coastline. Furthermore, the castle is one of Turkey’s largest castles. The castle consists of three parts. It consists of the inner courtyard on the east separated by high walls, the outer castle on the west, and the inner castle built on the rocks to the south.

Mamure Castle bears traces of Roman, Byzantine, Seljuk, Karaman, and Ottoman Periods. Therefore, it has an important place among the other magnificent castles in Turkey.

Diyarbakır Castle’s walls and bastions still live as original and authentic cultural assets. So, it is still an important universal heritage for world history.

Diyarbakır Walls are one of the oldest and most robust structures in the world. Thus, they have been the subject of many folk songs, stories, and legends. It is one of the rare castles in the world with its magnificent reliefs and inscriptions on its bastions.

By the way, Diyarbakır Fortress and Havsel Gardens are on UNESCO’s world heritage list.

The Castle is one of the hundreds of castles that adorn Anatolia. The beautiful castle has been able to survive and what’s more, it is one of the well-preserved medieval castles. The castle looks like an open-air museum with walls of 6.5 km in length, 140 bastions, nearly 400 cisterns inside. Furthermore, glorious inscribed and decorated gates are also enlarging its fascinating beauty.

This castle is a structure that remained from the Seljuk Period in Anatolia. With its clover plan, the castle is a unique structure. Due to its architectural features, researchers believe that it is from the 12th century.

In Turkish, “Güvercin” means dove, and “ada” means island. So, “güvercinada” means Dove Island. This name might be because of the bird’s eye shape of the castle. Güvercinada Castle was built in a position protecting the harbor at the mouth of the Kuşadası Gulf.

There is an inner castle that Barbaros Hayrettin Pasha built and there are walls that İlyas Ağa built on the Güvercinada. The building reason for these walls was to prevent attacks from the islands and the sea during the Morea Revolt.

The castle is one of the most famous and well-preserved castles in Turkey. The castle is in Turkey’s one of the most popular touristic spots Muğla. Saint Jean Knights built the castle between 1406-1522. It takes place on a cliff rock, which is surrounded by a peninsula. There are French, Italian, German, British, and Spanish towers in the caste.

Today, Bodrum Underwater Archeology Museum is located in Bodrum Castle. It is the only one in Turkey and one of the most important underwater archeology museums in the world. The museum received the “Special Praise” award in the European Museum of the Year competition in 1995. There are artifacts from underwater excavations and research in the museum. What’s more, you can also see artifacts from excavations and research in Bodrum and its surroundings.

Sinop Boyabat Castle is located on one of two steep rocky hills in Gökırmak Valley. The castle was built in accordance with the natural structure of the rocks. Some of the towers among the castle bodies are rectangular and some are round. There are stairs, as well, leading to the towers inside.

Kilitbahir Castle was built by Fatih Sultan Mehmet in 1462-1463. We know that the name of the castle, “Kilid-ül Bahir” means “Lock of the Sea”. The eye’s bird view of the castle looks like a cloverleaf. So, the building consists of three parts: the outer castle, the inner castle, and the main tower. Thus, Çanakkale’s Kilitbahir Castle appears as one of the most magnificent castles in Turkey.

20 Best Things you MUST do in Çanakkale like a Local

The rock on which the Amasya Castle takes place is 700 meters above sea level and 300 meters above Yeşilırmak. The Castle consists of three parts, namely the Inner City (Hatuniye District), the Girls’ Palace, and the Upper Castle (Harşena). Besides, it has undergone an important repair after the Turks conquered Amasya in 1075. The castle served until the 18th century. Afterward, Amasya Castle lost its military importance after this century. In the castle, there are cisterns, water tanks, ruins of baths belonging to the Ottoman Period, and Pontus King Tombs carved into the rock.

Rumkale (Rum Castle) takes place on a hill covered with high rocks where the Euphrates River and Merzimen Stream join. There are some other historical structures that you can even see today. To name them, there are St. Nerses Church, Barşavma Monastery, many building remains, water cisterns, wells, and ditches.

During the Roman period, this settlement played an important role in the history of Christianity. The reason for that, Yohannes, one of the apostles of Jesus, came to Rumkale and spread the Christian religion here.

The castle was built at an altitude of 750 m and sits at the edge of a cliff overlooking the Fırtına Valley. Researchers believe that the history of the castle goes back to the 14th and 15th centuries. So, Zilkale  Castle consists of the outer walls, the middle walls, and the inner castle. By the way, It is only possible to reach the gate of the outer castle through a pathway in the northwest direction. There are three important buildings in the middle castle. These are garrison quarters, and a possible chapel and head tower. There are arched windows on the east side of the tower walls, and loopholes on the other sides.

So, if you wish to see this magnificent castle, you should visit Turkey’s Rize province right away. By doing so, you will not only enjoy the history but you will also enjoy the fascinating panorama of the castle. The magical location of Zil Castle will let you feel as if you are flying over the clouds.