We assume that there is no one here, among those who follow us, that has never heard of the name Fahriye Evcen. All of you have probably watched a work of the Turkish actress Evcen at least once in a lifetime! Yaprak Dökümü (The Fall of Leaves), Çalıkuşu (Calikusu), Ölene Kadar (Eternal), … You name the job!

So, we can totally, safely, and confidently say that the Turkish actress Fahriye Evcen is one of the most popular, beautiful, talented, and wanted female faces on Turkish TV screens. What’s more, her fame crossed borders a long time ago! Just like Tuba Buyukustun, Hande Ercel, or else Birce Akalay, Fahriye Evcen claims the rights on the crown of Turkish queens!

Make yourself comfortable because a long journey is waiting for you to discover this beautiful Turkish actress!

Who is Fahriye Evcen?

As we stated above, the actress was born in Germany. The famous actress is of Circassian origin on her mother’s side and an immigrant from Kavala on her father’s side. Evcen is originally from the village of Sarıçevre, in the Bafra district of Samsun. Born in Solingen, Germany, Fahriye Evcen stated that she had a hard time with her family in Germany when she was a child.

The Turkish actress has three siblings. so, their names are Ayşen, Demet, and Neşe. Fahriye Evcen’s mother’s name is Hatime and her father’s name is Ramazan Evcen.

Well, when she was seven years old, when the German neo-Nazis started to burn the houses where the Turks lived in the city of Solingen, Evcen’s family always kept the lights off in their house to avoid attracting attention.

What Did Fahriye Evcen Study?

While studying at the Sociology Department of Heinrich-Heine University in Düsseldorf, Germany, Fahriye Evcen started receiving TV series offers from Turkey. Thus, Evcen, after studying in Germany for a year, suspended registration and settled in Istanbul with her mother.

Then, Fahriye Evcen studied history at Bogaziçi University in Istanbul (Turkey). It is one of the most prestigious Turkish universities. And the actress graduated from the university in 2014.

Aydoğan introduced Evcen to producer İbrahim Mertoğlu while she was on Oya Aydoğan’s program as a guest while she was on holiday in Turkey. Thus, Fahriye Evcen suspended registration in Germany and settled in Istanbul with her mother. Then, Evcen played the character of Necla in the TV series Yaprak Dökümü (The Fall of Leaves). With this character and the series, she gained great recognition for the first time and the door of success and fame opened for her all the way through.

Fahriye Evcen had her first cinematic experience as the leading actress in the movie Cennet (The Heaven). The feature film was released on April 11, 2008. Then, in the same year, the Turkish actress Evcen played the leading role in the movie Aşk Tutulması (The Goal of My Life).

The actress played the character of Feride in Çalıkuşu, produced by TİMS Productions. She returned to the silver screen with Burak Özçivit, with whom she shared the lead role in Çalıkuşu, this time with a feature film Aşk Sana Benzer (Love Like You). The release date of the movie was 2015. Furthermore, it is now available on Netflix.

Fahriye Evcen is an emotional, domestic, unstable, planned, and programmed person. “My zodiac sign is Gemini, but my ascendant is Cancer, and I think I have more of my ascendant’s traits. Cancer is a little more emotional and introverted, while Gemini loves to travel more and is an extrovert. I am a homebound person and there are times when I am very emotional. Many of my friends say, ‘We can’t believe you are twins’. My only trait from the twins is; my indecision.”

How Does Fahriye Evcen Spend Her Spare Times?

The Turkish actress Fahriye Evcen likes to spend her free time with her family and girlfriends. Evcen also takes great pleasure in traveling. “I have one or two groups of childhood friends and college friends.

Whenever we have time, we make programs with them and have dinner. Girlfriends are a must. I also love to travel, I can pack a suitcase instantly. If someone says, ‘We are going somewhere in the evening’, I organize almost everything. I love seeing different places. Even in summer, I do not prefer a sea holiday. I usually enjoy city or nature travels.”

What is the Source of Happiness for Fahriye Evcen?

So, the attention she receives from her fans around the world is one of her greatest sources of happiness. Moreover, she says, “I come across comments from all over the world on Instagram or Twitter and it’s an incredible feeling. Unless you live with them, it is difficult to understand what kind of bond they form, but their interest is truly blissful. Arab countries closely follow every project, including movies.”

“They are currently our most active audience. After Çalıkuşu, we see the same interest from Russia and Ukraine. Balkan countries have been following closely since the series Yaprak Dökümü (The Fall of Leaves). The comments are very encouraging. It’s a great feeling to appeal not only to our own culture but to other cultures as well.”

What Kind of Books Does Fahriye Evcen Read?

So, the Turkish actress Fahriye Evcen is not a very good novel reader. The actress, on the contrary, usually likes to read informative books. “I did not have the opportunity to study anything other than history during my school years. I read so much about history over the course of four years that it formed a habit in me. At the moment, I usually read books about history.”

By reading these lines above, remember that the Turkish actress Evcen studied history at Boğaziçi University.

Which Movies did Impress the Turkish Actress?

The Turkish actress Evcen likes to rewatch movies she has watched before, especially “Yeşilçam” (The Green Pine) movies. “I love Münir Özkul, for example, he is a very valuable artist. I came across a movie of him recently and although I watched it many times, I watched it again with the same pleasure.”

What’s more, she also has some new movies to watch after a while, for example, ‘Interstellar’. Also,  she also really likes ‘The Grand Budapest Hotel’ and ‘Birdman’ movies and says they are great and rewatchable movies.

Fahriye Evcen is currently starring in the new series of TRT 1, Alparslan: Büyük Selçuklu (Alparslan: The Great Seljuks). The series is directed by Sedat İnci and produced and scripted by Emre Konuk.

Bringing the breathtaking epic story of Sultan Alparslan, the unique ruler of Seljuk and Turkish history, to the screens, names such as Barış Arduç, Fahriye Evcen, and Barış Bağcı take part in the lead roles of Alparslan: The Great Seljuk series.

Akça Hatun, also known as Aka Hatun, was the first wife of Alparslan, the second Sultan of the Great Seljuk State. There is no information about her date of birth and death. However, Alparslan married Seferiye Hatun after Aka Hatun. Well, Sultan Alparslan had 12 children from these two marriages. So, the names of their children are as follows:

The Turkish actress Fahriye Evcen has an impressive career. The Turkish actress has taken part in so many Turkish TV series, dramas, and feature films. Below, you will see the complete list of all the works she has gotten involved in so far…

The Private Life of Fahriye Evcen

The beautiful and talented Turkish actress Fahriye Evcen got married to actor and model Burak Özçivit on 29 June 2017 at Said Halim Paşa Mansion in Istanbul. The actor, Burak Özçivit, is also a world-famous Turkish face and one of the most popular Turkish actors.

On April 13, 2019, the sons of Fahriye Evcen and Burak Özçivit couple were born in Istanbul American Hospital. The couple named their son Karan. And there is also another good news! The Turkish actress Evcen is now 2.5 months pregnant with her second child.

Well, before marrying Burak Özçivit, the eminent Turkish actress Fahriye Evcen had a long-term relationship with the Turkish actor, director, and musician Özcan Deniz. The two began a relationship in 2008 and split up in 2012.

The actress also had a relationship with the Turkish actor Barış Bağcı one month later after breaking up with Özcan Deniz. However, this relationship didn’t last so long and the reason why Fahriye Evcen and Barış Bağcı broke up is still unknown.

The 9th Most Beautiful Woman of the World in 2017

In 2017, the Turkish actress Fahriye Evcen was ranked ninth in the list of Gigi Hadid, Emma Watson, Adriana Lima, Hillary Clinton, and Angelina Jolie in the “30 Most Beautiful Women in the World” vote opened by the Los Angeles-based website Buzznet.

Well, as you can see, Evcen is nothing but a social media phenomenon, and she uses her accounts very actively.

A 6.6-magnitude earthquake occurred in Izmir. The earthquake affected the coast of Seferihisar district in the western province of Izmir on Friday (today). The Disaster and Emergency Management Authority (AFAD) made the statement earlier today. The tremors occurred in the Aegean Sea at a depth of 16.5 kilometers (10.3 miles). However, people felt it across… 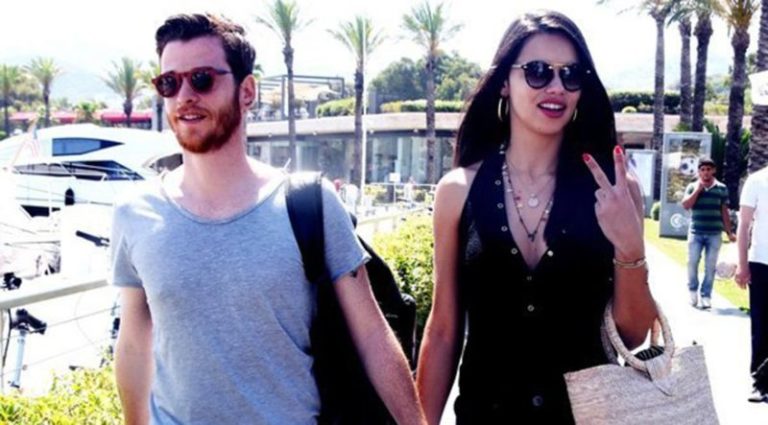 Good news for Meryem Uzerli’s fans. Finally Meryem Uzerli is returning to television! After leaving the Magnificent Century, Meryem Uzerli refused all of the offers she had to get into a new tv series until the new drama project Cesaret (Courage)! It was announced by the production company “03 Prodiksiyon” that Meryem Uzerli and Murat…