Çalıkuşu (The Wren) is based on the original novel. Feride lost her mother in her childhood she grew up in his aunt’s house with her cousin Kamran (Burak Özçivit). After having education and becoming a teacher Feride was now a young woman and she felt into love with Kamran. Their love was nearly perfect since some jealous thoughts spotted in her mind and she tought that there was another woman in Kamran’s life… Feride left her aunts home and went to Anatolia for work…

It was a runaway of the young lovers from their families and past. The run become a pursuit of a legendery love between delicate beauty  Menekşe (Sedef Avcı) and Halil (Kıvanç Tatlıtuğ). Also it was the first Turkish drama which made an international success especially in Middle East. Let’s say first starring of Kıvanç Tatlıtuğ among Middle East televisions.

A legendary love story in the very famous land of the fairy chimneys of Ürgüp. The love story between the powerful countryside landlord Seymen (Özcan Deniz) and Bahar (Nurgül Yeşilçay) a very modern woman from the city. The cultural difference rapidly changed to a mutual cultural conversion. The series was on 2003 – 2004 season but people still remember this great love story.

Medcezir is actually based on the famous American tv series The O.C. with some modifications on the scenario and story. Çağatay Ulusoy and Serenay Sarıkaya got the leading roles as Ryan-Yaman and Marissa-Mira.

Click here to read our article about Medcezir(The Tide)

Sıla was a middle eastern drama about solid traditions and bride exchange. Sıla (Cansu Dere) had to get married with the clan leader Boran (Mehmet Akif Alakurt) to save his brother’s life. However, Sıla was planning to escape from Boran, but she slowly fall in love to him.

Asi (Rebel) was a drama about two families who has friend & foe situations for three generations. At last, the beautiful Tuba Büyüküstün as Asi and handsome Murat Yıldırım as Demir fall in love while their families see each other as enemies.
Demir (Murat Yıldırım) ve Tuba Büyüküstün (Asi)

Can a women judge, given oath to the law fall in law to a criminal suspect?
Feride (Bergüzar Korel) ve Mahir Kara (Kenan İmirzalıoğlu).

Plot from our article: https://www.doyouknowturkey.com/karadayi-the-new-series-of-kenan-imirzalioglu/

The story of series based on a desperate love story and the search for justice. Kenan İmirzalıoğlu plays the character Mahir, who’s father was accused by a murder of a public prosecutor. In fact his father was an innocent man and he was selected as a victim of this murder. Mahir will try to save his father from death sentence and gives everything to find the true murderer. On his way to find the true justice he met with Feride (Bergüzar Korel) and felt in love. His way was not an easy way, his life was on danger, his enemies was dangerous but he must fight with them with everything he has. –

Another story of an impossible love; the daughter of the housekeeper and the son of the rich! It was a great drama and it was the first major role of Çağatay Ulusoy on tv.
Hazal Kaya (Feriha) , Çagatay Ulusoy (Emir)

Binbir Gece (One Thousand and One Nights) was a slightly different adoptation of the original tales. Şehrazat – Scheherazade (Bergüzar Korel) is a desperate mom who’s son is fighting with leukemia and needs money for treatment of his son. Onur (Halit Ergenç) the rich boss of Şehrazat, makes an indecent proposal to Şehrazat that he will give the money if Şehrazat spends one night with him. After that night Şehrazat stucks with her boss and they become lovers.

Role become real and they married in real life.

6 – Filiz and Yılmaz in “Ihlamular Altında (Under Lindens)”

This is the series where Tuba Büyüküstün’s star shined. Filiz (Tuba Büyüsütün) and Yılmaz (Bülent İnal) are two young lovers who lives in a poor neighbourhood and planning to get married. However, the economic problems makes things worse, the rich and bad boss Ömer has a feeling to Filiz and tries to seperate them.

5 – Polat and Elif in “Kurtlar Vadisi (Valley of the Wolves)”

The love story of Gümüş (Songül Öden) and Mehmet (Kıvanç Tatlıtuğ) is the first popular Turkish tv series in Middle East.  Kıvanç Tatlıtuğ earned his reputation with this tv series.

3- Fatmagül and Kerim in “What is Fatmagül’s Fault”

What is Fatmagül’s fault? definitely has the most original story. Fatmagül (Beren Saat) was raped by a group of rich boys. Kerim (Engin Akyürek) was in the group but does not remember if he did something, but actually he didn’t. Kerim accepts the guilt and convinced to get married with Fatmagül, who hates him as expected. Slowly things get clear and Fatmagül figures that Kerim was not in that group and actually he saved her from more. Then they move to istanbul to start a new life and seperate their ways but their destiny leads them to a great love.

Aşk-ı Memnu was a sensational tv series about a forbidden love. Beren Saat as Bihter is a young women married to a rich man Adnan Ziyagil (Selçuk Yöntem) but it was a marriage of convenience.  The missing thing was love and excitement which makes Bihter’s life so unpleasent even in such a welfare. Adnan’s nephew, also his foster Behlül Haznedar (Kıvanç Tatlıtuğ) is a young and super handsome man…Behlül started to have an attraction to Bihter and started to seduce her, they suddenly become secret lovers.

It was a great drama based on the original the novel Aşk-ı memnu (The Forbidden Love) by Halit Ziya Uşaklıgil.

Muhteşem Yüzyıl (Magnificent Century), the legendary tv series of recent years (2011 -2014).  It is based on the life of the Kanuni Sultan Süleyman (Suleiman The Magnificent | Halit Ergenç) and the love between his queen Hürrem Sultan (Hurrem – Roxalena / Alexandra | Meryem Uzerli). The passionate love between the great Sultan and a powerful woman made them one of the best couples of history also insipred this series.
Halit Ergenç and Meryem Uzerli

The Young and Beautiful Star of “Dear Past” (aka Sisterhood) Turkish TV Drama: Özge Özacar

Today, we are appearing in front of you with our first article of the new year! Owing to the fact that the importance of...
Read more
Turkish Tv Series & Drama

Many people have been wondering for the release date of a new exciting Turkish TV series. What TV series we are talking about is...
Read more
Celebrities

The Turkish actor Taner Ölmez is undoubtedly one of the most popular names on Turkish televisions. The actor has been taking place on TVs...
Read more 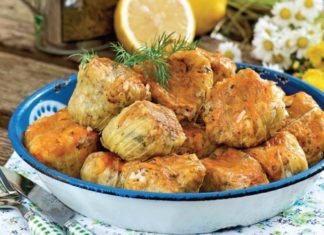 What is “Kabak Çiçeği Dolması” (Stuffed Zucchini Flower) and The Easiest...

The Young and Beautiful Star of “Dear Past” (aka Sisterhood) Turkish...

The Easiest Way to Make Turkish Yoghurt at Home

The 5 Best Cities in Turkey to Have Unforgettable Memories in...