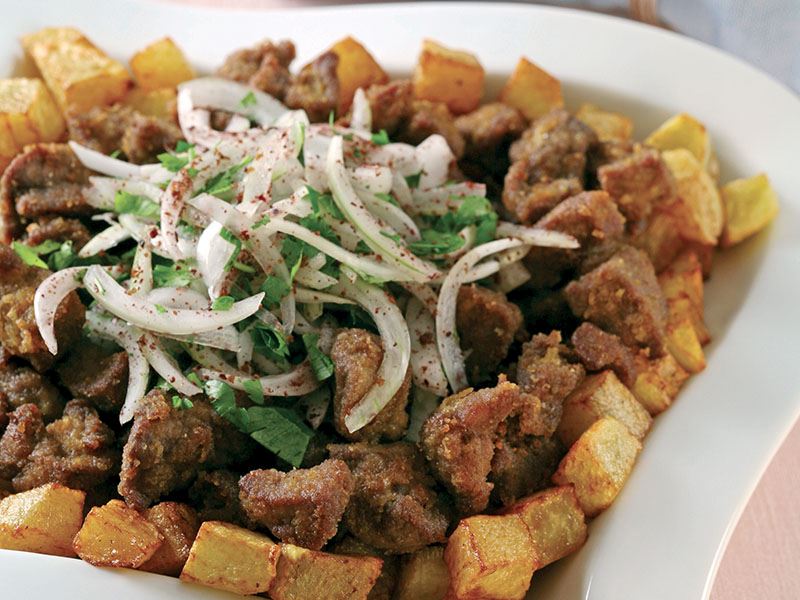 In Turkey, people call fried liver and onions as Arnavut Ciğeri (arna-VOOT’ JEE-air-EE’) or Albanian Liver. It is most likely a result of the years when the Ottoman Empire ruled Albania and much of Eastern Europe. No matter what the name is, this dish is very delicious.

Its great taste and tenderness begin with the liver itself. However, you can only use young, very fresh calf or lamb liver. Thus, you can have the fresh taste. So, you need to remove and discard any veins because these can be tough after cooking. Next, you should carefully cube the liver, and season and flour, ready to saute in butter or oil. Furthermore, as for garnish, the chef slices red onions thinly and tossed with salt, chopped Italian parsley. And sumac, a tangy dark-red spice common in the Mediterranean and the Middle East.

Albanian fried liver and onions are most often served as a meze or starter. But you can also eat larger portions of it as a main course, too. On the other hand, restaurants often serve with slivers or cubes of potatoes that are oven-baked rather than fried. It’s a popular dish in every Turkish tavern or meyhane (MAY-hahn-EY’), along with Turkish rakı (rah-KUH’). Turkish rakı is an anise-flavour liquor. To drink rakı, you should mix it with ice and water. By the way, it is similar to ouzo or arak. So, if you’re looking for new ways to serve nutritious liver that the whole family will like, try this authentic Turkish recipe. For a variation, you are better to take a close look at our recipe below. Let’s take a look for the ingredients;