Alinazik or Ali Nazik kebab is a delicious Gaziantep speciality and one of the Turkish people favourites. So, it is a very tasty combination of char-grilled smoked eggplant puree. What’s more, yoghurt and topped with tender lamb stew complete the perfect combination. Therefore, Turkish people serve Alinazik with rice pilaf and grilled vegetables aside. It really is a feast to all senses and a special dish to share.

On the other hand, there are several assumptions where the name Ali Nazik came from. So, here are the two different and main stories. One of them dates back to the 16th century Ottoman Empire. It was the time of the reign of Yavuz Sultan Selim. On a trip to the city of Antep, (today’s Gaziantep in Turkey), the Sultan was greeted with this local delicacy of delicious eggplant and yoghurt mash with a grilled lamb over. Sultan Selim liked the dish so much. Then, he asked “Who’s ‘gentle hand’ (“Eli nazik” in Turkish) made this?” The story tells that the name, “Ali nazik,” has stuck since then.

There is also another story. According to this story, the name was adopted from the old Ottoman Turkish language. In this language, “ala” meant “beautiful” and “nazik” meant “food.” Over the centuries, this turned to “Ali nazik” (In modern Turkish, “nazik” means “polite,” thus the meaning “polite Ali”).

The highlight of this dish for us is the delicious smoked eggplant puree, mashed with plain yoghurt (we recommend strained or thick creamy yoghurt). To get the smoky flavour for the eggplants, we highly recommend roasting them over a coal fire (here’s how to roast the eggplant over the burner) or over the gas burner. In Turkey, people use a very simple gadget “Kozmatik” to cook the aubergines over the burner. It has a steel base with holes on it, so it is a genius idea to cook if you can get it. It makes a bit of a mess but the smoky taste of the eggplants is well worth it. You can cook the eggplants a day ahead of time. Once mashed, mix with the juice of ½ lemon to help retain its colour and keep in the fridge, covered.

Traditionally, a cook uses stewed tender pieces of lamb in a sauce of Ali Nazik. Though you may replace it with a meat of your choice. The creamy eggplant and yoghurt puree is just heavenly with the meat topping, hope you enjoy Ali Nazik.

Ali Nazik Kebab, a southern Turkish speciality from Gaziantep region, is a feast to all senses. The smoky eggplant and garlicky yoghurt puree provide a delicious base for the tender lamb stew, placed over the top. Served with grilled vegetables and plain rice, Ali Nazik is a delicious and impressive kebab to enjoy.
Recipe type: Traditional Turkish Kebabs
Cuisine: Turkish Cuisine
Serves: 4
Ingredients

How to Cook Ali Nazik Kebab

A List for Turkish Flavours: Top 10 Most Common Used Ingredients in Turkish Cuisine

Cornbread is a highly underrated side dish. You can whip up this deliciously sweet and moist homemade cornbread recipe with just a few pantry...
Read more
Cuisine and Recipes

This impressive dish is a legacy of the Ottoman Palace kitchens. And yet another of the imperial demands for ingenuity concerning the much-loved eggplant,...
Read more 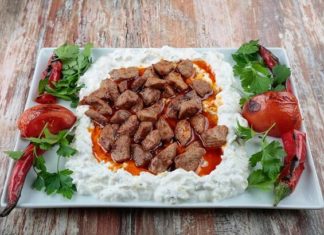 A Special Flavor of Turkish Cuisine: Ali Nazik Kebab — A...

Eray Alpay Özdemir - December 29, 2019 0
Alinazik or Ali Nazik kebab is a delicious Gaziantep speciality and one of the Turkish people favourites. So, it is a very tasty combination...

A Mystic and Detective Story on Blu TV: ALEF — ALEPH...

A List for Turkish Flavours: Top 10 Most Common Used Ingredients...