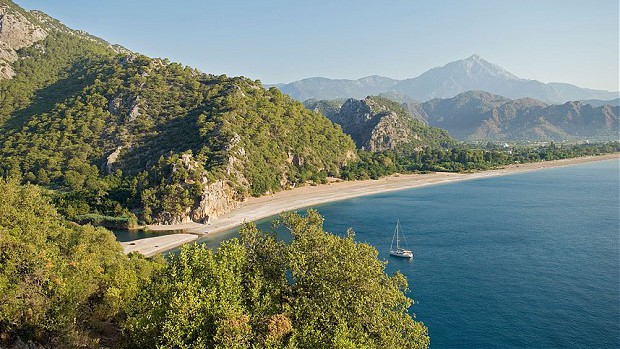 Çıralı is the neighbour town of the famous travel spot Olympos in Antalya. Terry Richardson from Telegraph’s Travel site, wrote a good article about this beautiful travel spot of Mediterranean.
Cradled between two pine-clad rocky spurs tumbling steeply down into the Mediterranean from the high mountains of the Lycian peninsula, the graceful arc of beach fronting the laid-back resort of Cirali is one of the most unspoilt in the Mediterranean. And it does not just travel writers and the holidaying families drawn back to this unique spot year after year who think so. Just ask the endangered loggerhead turtles, sizeable numbers of which still swim ashore each summer to lay their eggs beneath the smooth, sun-warmed pebbles and coarse sand of this two-mile long strand.
Crunching along the silent shore, watching gulls idly quartering the vast expanse of milky-blue ocean and swifts wheeling more earnestly above the citrus groves blanketing the fertile plain behind, it’s easy to forget that the booming gateway resort city of Antalya lays a mere hour or so’s drive to the north. The sunloungers, tasteful wickers umbrellas and tiny flotillas of beached kayaks fronting the small strip of simple beachfront cafés that form the fulcrum of most visitors Cirali experience are proof enough that even this most low-key of resorts has succumbed to progress.
Fortunately for those favouring a mellow holiday in beautiful surroundings, however, such progress has been minimal, as the area is protected by both the Turkish Forestry and Culture and Tourism ministries. Kick-out to sea and look back over the land and, beachfront cafés apart, you’d be hard-pushed to tell that there was a sprawling village cum resort there at all, so lost are the low-rise buildings amongst dense stands of orange, lemon, mulberry, plane, pine and eucalyptus trees. In fact there are over a hundred pensions here, and dozens of café-restaurants. There’s also a mosque, a primary school and the scattering of farms that constituted the settlement’s raison d’être before tourism began to take-off in the 1990s.
Redoubtable British traveller Freya Stark visited Cirali in the 1950s, seeking traces of Alexander the Great’s route through the region, writing of the beach “No human trace was there, except a heap of branches collected for firewood”. It may not be quite as empty as in Stark’s day, but Cirali remains a very special place. A dead-end to vehicles (the main coastal road is several miles above and west of the resort), relatively little traffic plies the two roads cutting through the settlement, one running just behind the beach, the other at the foot of the limestone crags bordering its western rim. The paucity of traffic and flatness of the terrain make getting about by bike popular, and many pensions allow guests to use their “resident” cycles for free, or they can be hired cheaply (with child seats) from a couple of outlets in the village centre.

The sun loungers and shades belong to the cafés behind the beach road most families spend the bulk of their time on the beach, where there’s a homespun volleyball net and sea kayaks for hire for the energetic, but refreshingly little else to do bar playing in the pebbles and swimming. Take deck shoes to cope with the stones, and note with caution that after the first couple of metres there’s a sharp drop-off to deep water. The sun loungers and shades belong to the cafés behind the dusty beach road are free providing you patronise the establishment they belong to. The food is good too, with delicious Turkish dishes prepared from scratch using fresh ingredients, although there are home-made chips, pasta dishes and pizzas for children suffering withdrawal symptoms. Located on a hillside an hour’s walk north of the village centre is a fascinating natural phenomenon, the Chimaera. Here, beneath the pines, is an eerie clearing punctured by flame-spurting vents. Nobody is sure of either the composition of the gases issuing from the fissures, nor how they remain alight. What is certain is that the flames have been flickering here for a long while, as it was ancient Greek explorers who named the phenomenon the Chimaera after the fire-breathing monster of their mythology. Hopefully suitably fired-up by the Chimaera, you may be able to inveigle the offspring into the half-hour stroll south along the beach to the ancient Greek site of Olympos, stunningly situated at the mouth of “a secret’ valley. There’s a reed-fringed lagoon to play in, bubbling freshwater springs and Indiana Jones-style discoveries to be made beneath the lush foliage blanketing the ruins, including a theatre, temple, Byzantine church and, beyond the river bed, rock-cut tombs.

Thomas Cook (0871 895 0055; flythomascook.com) has year-round flights to Antalya from several UK airports, as do both Thomson (0844 871 0878; thomsonfly.co.uk) and Turkish carrier Pegasus (0845 0848 980; flypgs.com), whilst Monarch (08719 405 040; monarch.co.uk) and easyJet (0843 104 5000; easyjet.com) offer summer season flights to Antalya (April-end October). Antalya airport is around 50 miles from Cirali; airport pickup and transfer (1.5 hours) is £60 with Cirali-based Reyyan Tour (0090 242 825 7352; reyyantravel.com) or, probably cheaper, through your pension. Midi-buses from Antalya’s bus station (otogar) to the Cirali turn-off charge £4.45; waiting minibuses ferry visitors down to the resort for around £1.85.
WHERE TO STAY IN CIRALI
Cemil’s £Friendly, family-run pension tucked into the base of the cliffs near the village centre yet just a few minutes’ walk from the beach. Breakfasts are traditional and copious (0090 242 8257 063; cemilpension.com; doubles from £44).Myland Nature ££Comfortable place located near the beach, a mile or so from the village centre. The emphasis is on home-grown organic foods and activities such as yoga with accommodation in neat wooden chalets (0242 825 7044; mylandnature.com; doubles from £63; open March-October).Odile ££Set just behind the beach in its own lush, near sub-tropically vegetated grounds. Rooms are light, spacious and equipped with fridges, plus there are several three- and four-bed family rooms (242 825 7163; doubles from £51; open March-October).
WHERE TO EAT IN ÇIRALI
Cemil’s restaurant £Delicious pides (Turkish pizza) are cooked to perfection in a wood-fired oven, sea bass baked in a clay pot and served with salad doused with a lemon juice and pomegranate syrup dressing. Cemil’s kebabs are good too. Dining is al fresco, beneath mulberry trees (0090 242 8257063, open daily). Ikiz £Perhaps the best all-round choice from the strip of café-restaurants backing the beach, it does everything from fine meze (starters) to pide, pizza to fish (0242 8257179, open daily)Oleandro ££Attached to the boutique hotel of the same name, this is the most sophisticated place in Cirali offering a mix of traditional Turkish food and international dishes, including tasty meze, lobster and pastas (0242 8257213; oleandropension.com; open daily March-October)
THE BEST BEACHES of ÇIRALI
Most visitors are drawn to the section of beach near to the village centre, not least because the line of cafés backing it provides free, wicker umbrella-shaded loungers to those who patronise their establishment. The more adventurous walk south for half an hour to where the Olympos valley opens onto the shore. Here there’s a stream mouth to explore and an islet offshore which the adventurous clamber up and leap off. The snorkelling is good here, too. At the far north end of the beach the shallower waters are good for younger children, but it can become a bit messy due to the rubbish left by picnicking locals.
THE INSIDE TRACK OF ÇIRALI
The 300 mile long Lycian Way long-distance coastal walking trail runs through Cirali. See Kate Clow’s “The Lycian Way” guide and cultureroutesinturkey.com.The dramatically rocky coastline south of Cirali is explorable only by sea. Boat trips can be arranged through ciraliboatrip.com.
DID YOU KNOW?
Turtles that nest on Cirali beach, have been in existence for 40 million years.
Original Article:  www.telegraph.co.uk/travel/sunandsea/10148380/Cirali-Turkey-Secret-Seaside.html