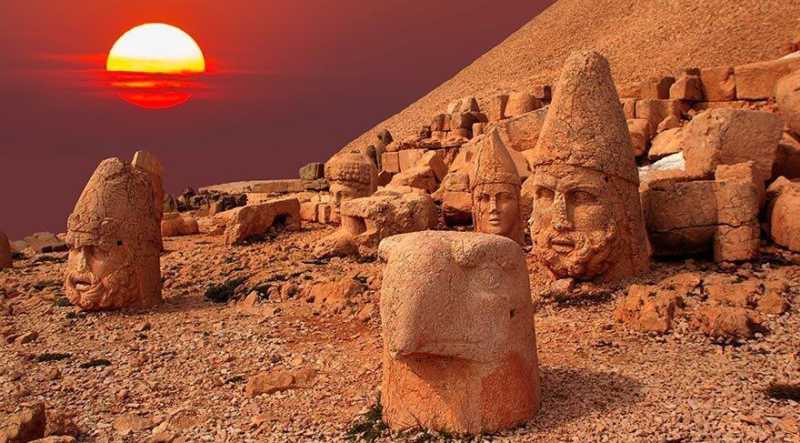 The fascinating and scary funerary mound of King Antiochus I of the Kingdom of Commagene sits atop this 2,150-meter peak. Under the 50-meter-high, man-made burial mound, Antiochus’ tomb is said to be concealed. Though, despite extensive archaeological work here, his tomb has never been found. However, on top of the mound is one of eastern Turkey’s prime tourist attractions.

The spectacular terraces here are littered with the toppled remnants of giant stone statues. They once majestically lined up to celebrate Antiochus’ own glory and the glory of the gods.

If you only have time for a short journey into eastern Turkey and have to pick one sight to see, Mount Nemrut can’t be beaten. The mountain is about 43 kilometres from Kahta, Adıyaman province. You should witness for sunrise on the summit. This experience is going to be the true magic of the setting.

Note that due to snow closing the road to the summit, the mountain is only accessible from around May to October. Also, be aware that from the summit car park to the funerary terraces, there is a 600-meter uphill walk.

A Brief History of Mount Nemrut

This region and so Mount Nemrut found itself right on the border between the two giant rivals. It was during the days of the competing Roman and Parthian (Persian) Empires. Formerly part of the Roman Empire, Commagene and its governor, Mithridates I, declared independence.

When Mithridates I died in 64 BC, his son Antiochus I claimed the crown. After that, he took his tiny kingdom’s independence further. For this purpose, he signed treaties with both Rome and the Parthians. It was actions such as these that led Antiochus to believe Commagene (and himself) to be more important than they actually were. And eventually led to his downfall, when he was deposed by the Romans in 38 BC.

A General View For The Mount Nemrut Archaeological Site

The most complete statuary are on the East Terrace. Although the statues have all lost their giant heads, which now sit incongruously on the ground beside the bodies. The colossal figures of the gods face the main altar.

In addition to eagle and lion representation, there are also Greco-Persian deities here. For example, Zeus Oromasdes, Heracles-Verethragna-Artagnes-Ares. Others are Apollo-Mithras-Helios-Hermes and Commagene-Tyche. Antiochus I himself is represented here as well. The statues are flanked by broken reliefs depicting Antiochus’ lineage. On the northern side, the relief shows his Persian (paternal) ancestors. While to the north, the relief shows his Seleucid (maternal) ancestors.

On the West Terrace, most of the statues damaged over time, but the heads have not suffered the same fate. And moreover, they are wonderfully lifelike and they are in good shape. When you visit the site, you can see the Lion Horoscope with its astral motifs. They are symbolizing the deification of Antiochus I through the metamorphosis of the king into a star.

A Magnificent Sunrise in the Mount Nemrut

One of the essential rituals of visiting Mount Nemrut is enjoying the sunrise. And visitors must do it from the summit. King Antiochus, revering his ancestors in Western and Eastern civilisations, erected giant statues of gods on the East and West terraces. Furthermore, they cited their names both in Persian and Greek. So visitors enjoy watching the unique sunrise together with the statues of gods. The gods, by the way, have been witnessing it for two thousand years.

How to Go to the Mount Nemrut?

The Mount Nemrut Tumulus is in Kahta county which is 86 km east of Adıyaman city. There are many flights to Adiyaman Airport from Istanbul and Ankara. The best season for the ascent to the Mount is the period between April and October.

You can see the map below. Or, you can click the link to go to see the location of Mount Nemrut.

Mount Nemrut on the map.

Where to stay near Mount Nemrut for Sightseeing

There are several options for places to stay in Mount Nemrut. In this respect, Adiyaman, Kahta, and Malatya are the nearest towns. Of the three, Kahta is the closest but Adiyaman (86 kilometres from Mount Nemrut) has the best selection of accommodation. If you have a rental car, all three are a decent base from which to head to Mount Nemrut. If you want to be nearer, the tiny village of Karadut sits right at the foot of the mountain and has a range of small guesthouses, all of which offer sunrise tours and transport to the summit.

Mount Nemrut is one of the 8 wonders of the world. What’s more, it has been in the World Heritage List of UNESCO since 1986.